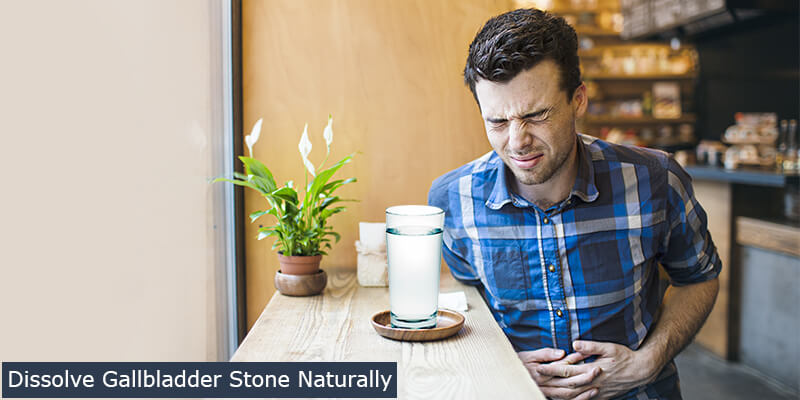 A common disease that a lot of people suffer from is gallbladder stones. The condition is most common among people who are more than 40 years of age. Abdominal pain along with fever, sweating, chills, jaundice, and vomiting are some of the common symptoms of gallstones. A chemical imbalance in your gallbladder is one of the main reasons for the formation of gallstones. In addition, being overweight can also lead to gallbladder stones. Though operating gallstones is an option, there are a lot of other natural ways that can help you dissolve gallstones. So, in this blog, we discuss some effective ways that can help you dissolve gallstones. Read on.

The main cause of gallstones is the formation of solid particles in the gallbladder by bile. The stones are formed when there is a high level of cholesterol or bilirubin. In addition, the presence of some other substances in the bile also leads to the formation of stones. Females, people who are overweight, have rapid weight loss, and starvation are at a higher risk of gallstones. There are two types of gallstones-

A large number of people don’t experience any symptoms at all. All types of gallstones don’t have symptoms. However, if there are some symptoms available, these include:

Gallstones can be easily dissolved by following some natural remedies. Some of the effective ways to dissolve gallstones are:

A very effective way to dissolve gallstones naturally is by staying hydrated. Drinking at least six to eight glasses of water per day helps in keeping the bile production smooth. In addition, drinking pure water can also help in flushing out cholesterol from the body, which is one of the main factors that lead to the formation of gallstones. However, make sure that you drink clean and safe water to remove gallstones naturally. Install a water purifier, which removes different kinds of impurities from water.

Tip: Drinking warm water with lemon juice in the morning can help in dissolving gallstones

There have been some claims which suggest that yoga can help remove gallstones. Yoga improves the lipid profile among diabetics. The reason is people with cholesterol gallstones have abnormal lipid profiles. Yoga also helps in relieving the symptoms associated with gallstones.

Surgery is not the only way to deal with gallstones. These natural and easy ways will help you dissolve gallstones. Drinking enough water is one of the safest and hassle-free ways to dissolve gallstones without any possible side effects. Make you use an RO water purifier to remove impurities and drink pure water without any impurities. However, make sure you stay hydrated and consult a doctor before following any of the natural remedies mentioned above.