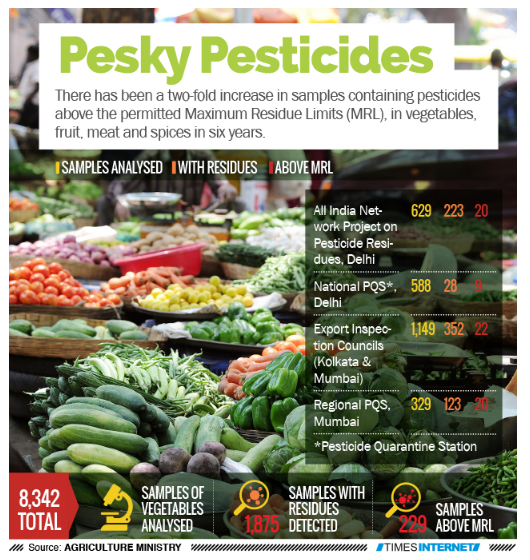 The use of pesticides in agricultural production is well known. Farmers from all around the world use a certain level of permissible pesticide to protect crops and produce from insects, herbicides, and fungicides. However, in recent times, samples of fruits and vegetables containing pesticides much above the permitted Maximum Residue Limits or MRL have been reported.

This is a grave concern as exposure to pesticides is not only hazardous to one’s health, it also hurts the ecosystem as well. Elaborating on this discussion, here are four disturbing facts about the use of pesticides in agriculture items individuals, families, Government Institutions, and environmental protection agencies must pay heed to –

Exposure to Pesticide During Pregnancy Can Trigger Autism in Unborn Child

According to the Autism Society, nearly 1% of the world’s population is currently living with autism. Autism is neurodevelopment of disorder that is caused due to a combination of genetic and environmental factors. Researchers and experts have narrowed it down to the mutation of gene UBE3A that leads to autism. In addition to that, there are undisputed environmental factors that are also strongly linked to the development of this disorder.

A pregnant woman exposed to kind of chemicals and compounds in her immediate environment is at risk of giving birth to an autistic baby. Expectant mothers are recommended by their doctor or nutritionist to consume high fibrous and easy-to-digest food. They are advised to increase the consumption of fruits and vegetables. However, given the state of things, there is a high chance that an expecting mother may be consuming contaminated fruits and vegetables.

Therefore, attention must be paid to cleaning all kinds of raw products with the help of a vegetable purifier. The appliance is built to clean residual pesticides and other pathogens. A vegetable purifier is a new-age appliance that can efficiently remove dangerous contaminants from food items that can harm the unborn baby.

The role of environment and development disorder in young children is still at the nascent stage of research. Although researchers and scientists have been to establish some collaboration between the two, we cannot ignore the fact that a developing brain is more vulnerable to toxins in the environment than an adult brain.

At the early stage of a child’s life, his or her brain goes through a series of development, and exposure to toxic chemicals and pesticides can lead to cognitive and learning impairment. Several studies have examined a strong link between pyrethroid pesticides and ADHD (Attention Deficit Hyper Activity Disorder). Being aware of the sources of harmful containments in the environment is important to protect a child’s health.

Overuse of pesticides in agriculture is a critical environmental hazard. Several independent studies have shown that excessive use of pesticides is known to decline the enzyme activity of the soil. The presence of enzymes in the soil is essential for maintaining its health and quality. Although pesticides are essential to expand agricultural produce, long-term exposure to pesticides can cause an imbalance between microorganisms and components of the soil. The pesticide-laced soil is also believed to contaminate groundwater which is yet another concern to ponder over.

Every year millions of species of insects and plants are becoming extinct from our planet. Increased human activity and excessive use of pesticides are partly responsible for this. Every location or sector is home to an indigenous species, and unfortunately, the diversity of our ecosystem is getting lost due to commercial agricultural practices.  Biodiversity loss can lead to severe consequences. It can lead to an imbalanced ecosystem functioning. Certain kinds of insects that preserve or capture the nutrients in the soil are also getting depleted.

The growing use of pesticides in Agriculture calls for investing in appliances like a vegetable purifiers. At the same time, measures must be taken to adopt alternative techniques that promote sound agricultural practices to check environmental ramifications and the protection of human health.